During the festival of Cape and Rapier, it was possible to look into the back court of the hôtel particulier that was formerly Madame Le Roy's Musée du chat - the cat museum - number 15 Grande Rue.  It has new owners and has been cleared so that restoration can be carried out.  Today this building is the only hôtel on the Grande Rue that is not finished in lime render.  Although the exposed rubble walls have picturesque qualities to today's eye, this would have looked very common to the 17th century owner, as it would tell that the owner was a more a farmer or other rude mechanical than a gentleman.  The cardinal's original detailed specification for the houses asked for rendered façades to the mansions, with tuffeau ashlar quoins and string courses.  Perhaps economy would drive the rear dependances and stables to be more humble and to have exposed coursed rubble walls (and even vulgar roman tiled roofs!), but  the removal of the render from the main house facades would have been unthinkable, both for reasons of watertightness and of blatant snobbery.  One can see in the ashlar-work window surrounds, where the particular stone used happened to be too large, that the original mason has hacked the face back to allow the adhesion of the render that he assumed was to follow.  One can observe this detail in the re-rendering of other Grand Rue houses too.
But nonetheless the stripped old building has a particular charm.  Madame Le Roy had laid out a picturesque garden too, but this has been cleared as well.
The rather lumpy building at the foot of the garden on the site of the hôtel's écuries or stables needs re-roofing to replace the nasty cement tiles used in the late nineteenth or early twentieth century on the inauthentic mansard-like roof section. 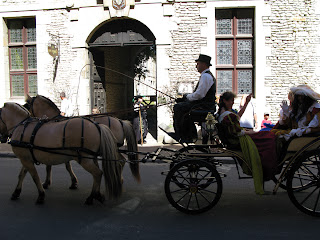 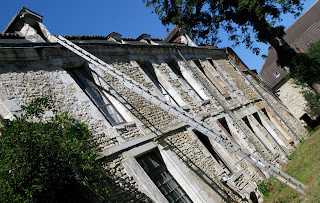 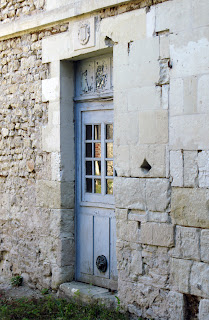 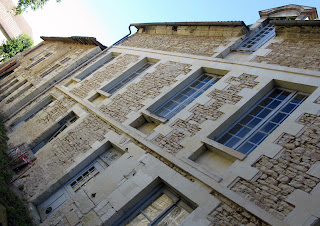 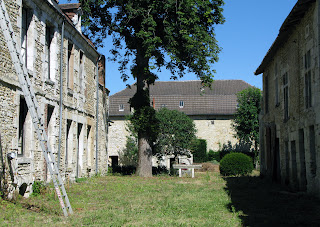 But soon, presumably, these views will become the 'before shots' of a major restoration.
***
Posted by Abbé Henri Proust at Tuesday, August 03, 2010