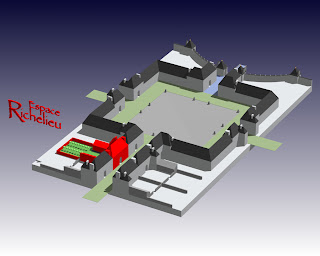 " The town of Richelieu will now benefit from State support for its future cultural development. The Minister inaugurated the Espace Richelieu:, a cultural centre that tells the story of the cardinal and his ideal town, and signed a three-year agreement of support for the town’s restoration projects.

The Cardinal has always fascinated the man of culture. Frédéric Mitterrand, now the French Minister of Culture, would have talked for hours if only his ministerial duties had not pressed him into a full day of travel all across Touraine.  He finally completed it all with eyes wide open and many an admiring glance.
Before doing a tour of châteaux highlighting the vital work of private owners, the Minister of Culture was greeted in Richelieu by the Mayor, who is none other than his colleague and friend in government, Hervé Novelli, Secretary of State for Tourism.
And if some official visits must sometimes seem tedious, the rediscovery of Touraine by a Frédéric Mitterrand, now in his role of a minister, was anything but a chore.
It must be said that both the Secretary of State for Tourism and Minister of Culture share the belief that the two political portfolios are often complementary, even fusional. Already signatories to a charter to combine tourism and culture to enhance the general attractiveness of the Hexagon – France itself - the two men have now initiated an agreement on cultural development between the State and the humble town of Richelieu for a period lasting three years.
Obviously the Ideal City as conceived by cardinal duc de Richelieu, cannot, with its mere 2,000 souls, carry out alone the development of a 'place that has the capability to become a cultural exception and mediator', in the words of Frédéric Mitterrand, enthusiastic after visiting the new Espace Richelieu:, created in a former grand mansion that had been renovated by the actor Gérard Klein.  The exhibit, with much museum display equipment, a virtual tour of the missing château de Richelieu in stereo 3D, and many other detailed memorabilia, welcomes the visitor and audience at the very heart of the 1640s cité idéale. The agreement will also allow the renovation of les halles, the ancient and original market building from the seventeenth century, and many other actions to enhance the attractiveness of the town of Richelieu, as well as creating a ‘Richelieu Circuit’.


Eloquent about the 'almost Shakespearean dimension of relations between the cardinal duc de Richelieu and King Louis XIII', Frédéric Mitterrand called for a ‘tourism of excellence’ for which Touraine has so many major advantages. The Minister saw confirmation of these qualities throughout the entire day’s visit."
Translated from Patrick Goupil’s article in La Nouvelle Republique 23/7/2010
We hope they won’t mind a little extra media circulation!
A few links about the Mitterrand visit to Richelieu (mainly in French): 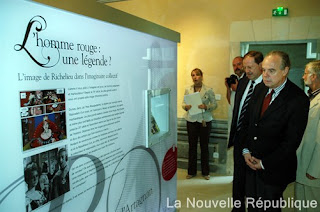 The Minister of Culture admits his passion for Richelieu.  The Homme Rouge as he is called on a panel from the exhibit in the Espace Richelieu:, consecrated to the Cardinal in his own town.
Posted by Abbé Henri Proust at Monday, August 02, 2010