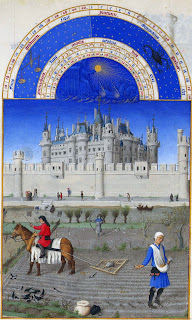 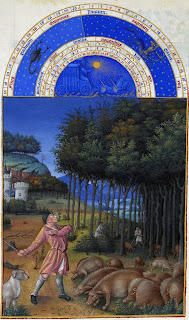 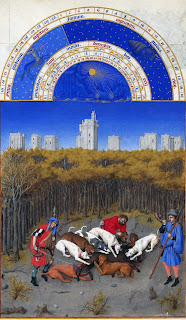 The Très Riches Heures du Duc de Berry or simply the Très Riches Heures (The Very Rich Hours of the Duke of Berry) is a very richly decorated Book of Hours (containing prayers to be said by the lay faithful at each of the canonical hours of the day) commissioned by Jean, Duc de Berry in about 1410. It is probably the most important illuminated manuscript of the 15th century, "le roi des manuscrits enluminés" ("the king of illuminated manuscripts"). The Très Riches Heures consists of 416 pages, including 131 with large miniatures and many more with border decorations or historiated initials, that are among the high points of International Gothic painting in spite of their small size. There are 300 decorated capital letters. The book was worked on, over a period of nearly a century, in three main campaigns, led by the Limbourg brothers, Barthélemy van Eyck, and Jean Colombe. The book is now Ms. 65 in the Musée Condé, Chantilly, France.
I struggle to find any connection with the great cardinal or his town; but aren't they pretty, these twelve illustrations of the months of the year.  I feel sure agricultural life in 1630 was pretty much the same as 200 years before.  The ancient forested dukedom of Berry lies 70km to the east of Touraine and (if possible) eclipses Touraine's reputation as the best place in France for the hunt!
I will put up three 'months' at a time: firstly the autumn quarter.
October: Tilling the field. In the background is the Louvre.
November: A peasant feeding the hogs acorns.
December: A wild boar hunt. In the background is the Château de Vincennes.

.... most of the castles illustrated in the calendar were owned by the duc de Berry!
Posted by Abbé Henri Proust at Friday, November 28, 2008