To the west of Richelieu, past Loudun (see the map of locations on the right hand side), is to be found the château of Oiron.  These pictures show the long gallery that is located on the eastern wing of the château on the first floor.  It has original painted decorations on the walls depicting classical legends, and a florid floor of glazed coloured tiles. It is really very spectacular.  On a summer afternoon, the sun streams in and lights up the internal window shutters.  This sort of long gallery was a common feature of grand noble houses of the 16th and 17th centuries - there was one in the now disappeared château de Richelieu.

As the castle now does not have any inhabitants, it has been used for a large display of modern art.  One of the installations, by Raoul Marek,  is a set of Sèvres porcelain that show the facial profiles of the inhabitants of the town when this particular installation was constructed.  These plates are mounted on the wall of one of the rooms ready to be used for an annual dinner that re-assembles the townsfolk in a repeating art event. 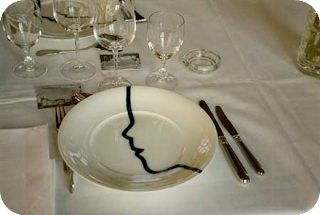