AUTUMN * WINTER * SPRING * SUMMER
***
Here are the last three months of the year cycle, the summer months.  Click on the seasons above to see and read about the other nine paintings painted by the Limbourg Brothers in about 1410.
Although the Duc de Berry owned a large part of central France and governed the Languedoc, he was often unable to meet the enormous expenses of his extraordinarily luxurious life. A great patron and friend of artists and a passionate collector, he commissioned works of all kinds; he loved sumptuous buildings, rare jewels, and richly illuminated books.
An avid builder, Jean de Berry personally supervised his restorations and constructions. The master architect for most of them was Guy de Dammartin, who successfully created in the upper stories a graceful decoration that fit in with the imposing grandeur of the whole. The palace and Sainte-Chapelle in both Bourges and Riom, the renovation of the palace and the Château du Clain in Poitiers, and the completion of the facade of Bourges Cathedral were accomplishments worthy of the importance of the Duke's three capital cities as well as monuments to his good taste in architecture.
By restoring châteaus and by building anew, the Duke provided himself with a series of beautiful homes throughout France: Nonette in Auvergne, Lusignan in Poitou, Genouilly and Concressault in Berry, and Gien, Montargis, Etampes, and Dourdan between the Loire and the Seine. The most famous residences, noted for their beauty and magnificence, were the Hôtel de Nesle on the left bank of the Seine facing the Louvre, the Château de Bicêtre to the south of Paris, and the Château de Mehun-sur-Yèvre, four leagues from Bourges.


An exhibition at the Metropolitan Museum of Art
with a lecture about the Belles Heures
also by the Limbourg Brotherst
July
château sur le Clain, Poitiers 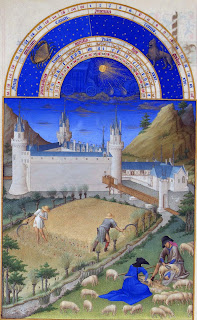 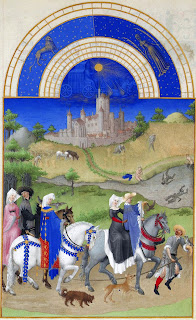 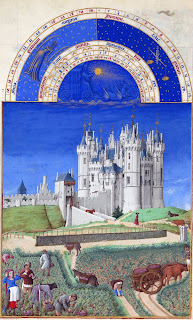