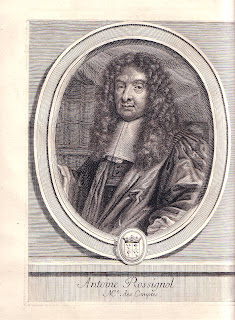 Antoine Rossignol and his son Bonaventure were the chief code-masters for the two Louis' XIII and XIV. They first de-crypted Hugenot ciphers at the seige of Réalmont in 1626.  They worked at the two King's sides for many years. Together they were responsible for 'Le Grand Chiffre de Louis XIV', or the Grand Cipher of Louis XIV, a cipher so difficult to de-crypt that it remained unbroken until finally solved in 1890 by Etienne Bazeries of the French Army's cryptographic department.
But concerning our Christmas and New Year 2008 Greeting -
This year we are sending our secret 2007 greeting enciphered, using a virtual 'Enigma' cipher machine. 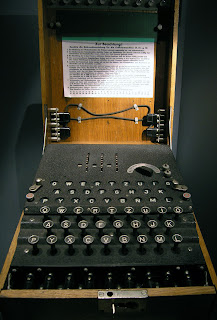 1. Open this web site: http://homepages.tesco.net/~andycarlson/enigma/enigma_j.html
this will supply an Enigma machine for you to decode the secret message or 'ciphertext'.
2. Have a look at the image of the machine where you will see a virtual Enigma machine like the one above (this new one actually works!).
3. Then click on the 'settings' button.
4. Make the following 'Day' settings:
Wheel (or rotor) order - 123
Ring settings - 111
Stecker (or plug) pairs - AB CD
Indicator settings - AAA
(don't forget to 'set' your settings!)
5. Click on the 'machine' button.
6. Enter the first six 'ciphertext' letters of the message below by clicking sequentially on the keyboard.
7. Our three-letter 'Message' code should appear as two identical sequences of three letters on the lampboard and the digital readout.
8. Now click on the letters on the three rotor windows, one after the other (from left to right), until they together display the three-letter 'Message' code.
9. Enter the rest of the 'ciphertext' letters below, starting from letter 7. Read off our Xmas Message in 'plaintext'.

The 'ciphertext' message is:

(disregard the spaces; the messages are always grouped in fives!)

NO-ONE BUT US TWO CAN DE-CRYPT THIS SECRET MESSAGE!